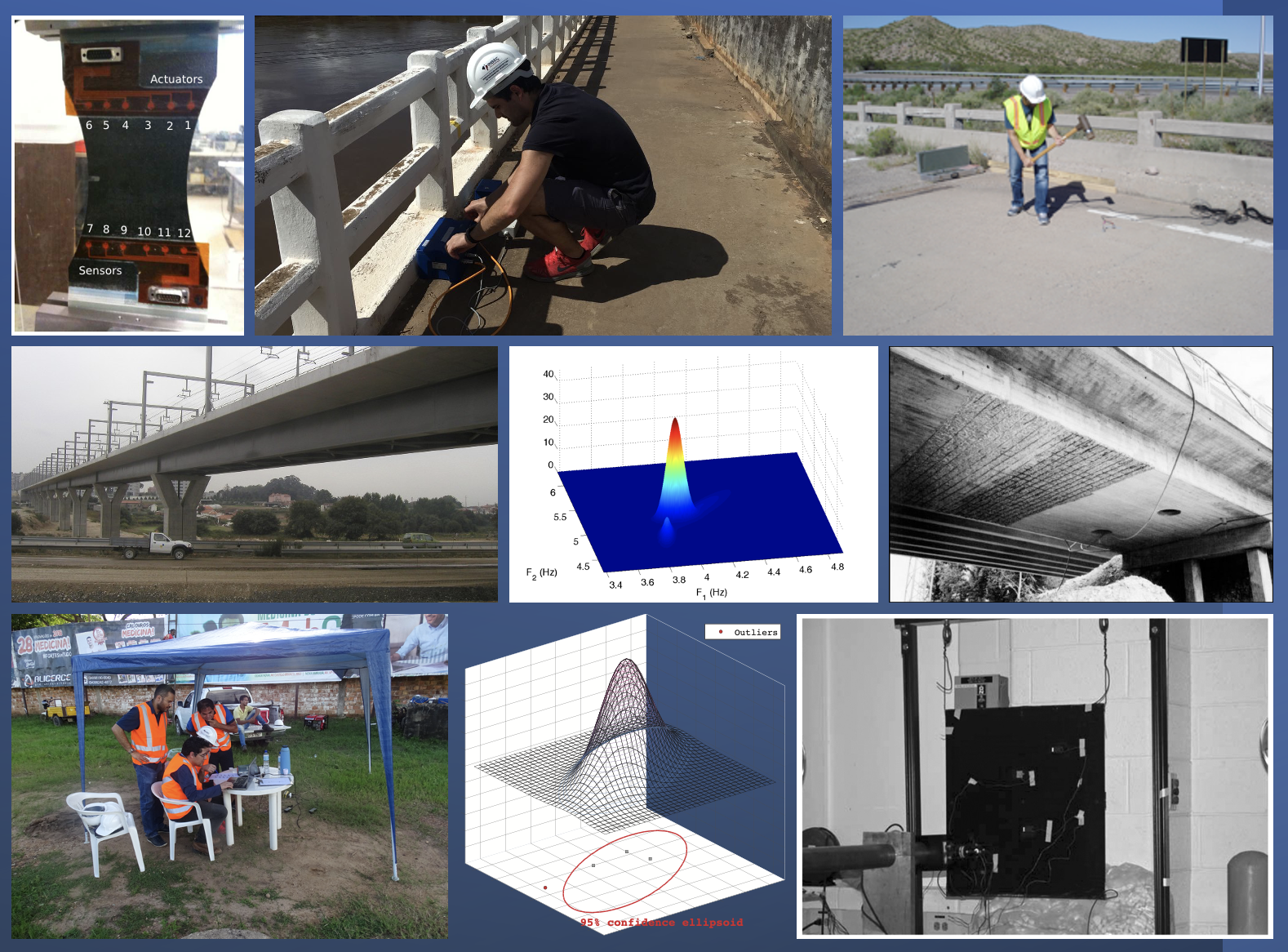 The process of implementing a damage identification strategy for existing structures is often referred to as Structural Health Monitoring (SHM). Under that definition, damage is normally defined as changes to the material and/or geometric properties of the structural system, including changes to the boundary conditions and system connectivity, which adversely affect the system’s current or future performance.

The basic idea of SHM is to build up a system similar to the human nervous system, where the brain (computer) processes the information and determines actions (maintenance activities), and the nerves (sensors) feel the pain (damage). In this context, machine learning algorithms play an importante role, as they can learn from the experience, i.e. from monitoring data. Machine learning is the science of getting computers and algorithms to model the reality without knowing the physical laws of structures. The SHM process can be posed in the context of a statistical pattern recognition (SPR) paradigm. The SPR paradigm is a way to simplify complex data and information into simple indices and graphical representations of better understanding to draw maintenance actions. In this paradigm, the SHM process can be broken down into four steps: Improved and more continuous condition assessment of bridges has been demanded by our society to better face the challenges presented by aging civil infrastructure. Indeed, the recent collapses of the Hintze Ribeiro Bridge that killed 59 people, in Portugal, and the I-35W Bridge in the US, that killed 13 people, pointed out the need for new and more reliable tools to prevent such catastrophic events. Besides those events, the financial implications and potential impact through optimal bridge management are vast. For instance, the American Society of Civil Engineers reports the cost of eliminating all existing US bridge deficiencies at $850 billion. These values clearly show that planned bridge maintenance can lead to considerable savings.

In the last two decades, bridge condition assessment techniques have been developed independently based on two complementary approaches: Structural Health Monitoring (SHM) and Bridge Management Systems (BMSs). The SHM refers to the process of implementing monitoring systems to measure in real time the structural responses, in order to detect anomalies and/or damage at early stages. On the other hand, BMS is a visual inspection-based decision-support tool developed to analyze engineering and economic factors and to assist the authorities in determining how and when to make decisions regarding maintenance, repair, and rehabilitation of structures.

While the BMS has already been accepted by the bridge owners around the world, even though with inherent limitations posed by the visual inspections, the SHM is becoming increasingly appealing due to its potential ability to detect damage at early stages, with the consequent life-safety and economical benefits.

The author believes that, in an effort to create more robust bridge management, the SHM should be integrated into the BMS in a systematic way. Nowadays, there is a generalized consensus about this integration, but few real applications have been accomplished, mainly because of the lack of interaction between all the participants involved in the bridge management field.

The bridge management has been defined as a multidisciplinary field incorporating knowledge from structural engineering, information technology, and economics.

Integration of physical modeling, monitoring and machine learning for SHM

In the last decades, the long-term structural health monitoring of civil structures has been mainly performed using two approaches: model- and data-based. The former approach tries to identify damage by relating the monitoring data to the prediction of numerical (e.g., finite element) models of the structure. The latter approach is data- driven, where measured data from a given state condition is compared to the baseline or reference condition. A challenge in both approaches is to make the distinction between the variations of the structural response caused by damage and environmental or operational variability. This research topic intends to promote a hybrid approach that integrates model- and data-based approaches to the structural health monitoring, using machine learning algorithms. Data recorded in situ under regular conditions are combined with data obtained from finite element simulations of more extreme environmental and operational scenarios, and both are input into the training process of machine learning algorithms for damage identification.

The structural health monitoring relies on the continuous observation of a dynamic system over time to identify its actual condition, detect abnormal behaviors, and predict future states. The regular changes in environmental factors have been reported as one of the main challenges for the application of structural health monitoring systems. These influences in the structural responses are in general nonlinear, affecting the damage-sensitive features in the most varied forms. The usual process to remove these normal changes is referred to as data normalization. In that regard, principal component analysis is probably the most studied algorithm in structural health monitoring, having numerous versions to learn strong nonlinear normal changes. However, in most cases, not all variability is properly accounted for via the existing nonlinear principal component analysis approaches, resulting in poor damage detection and quantification performances. In this article, a new paradigm based on deep principal component analysis, rooted in the deep learning field, is presented to overcome these limitations. This approach extracts the most salient underlying feature distributions by stacking multiple feedforward neural networks trained to learn an identity mapping of the input variables, where the network inputs are reproduced into the outputs. Similar to the traditional nonlinear principal component analysis–based approach, our approach identifies a nonlinear output-only model of an undamaged structure by comprising modal features into an internal bottleneck layer, which implicitly represents the independent environmental factors. The proposed technique is validated through the application on a progressively damaged prestressed concrete bridge and a three-span suspension bridge. The experimental results demonstrate that capturing the most slight nonlinear variations in the data can lead to improved data normalization and, consequently, better damage detection and quantification performances. [See] Use of a state space reconstruction to infer the geometrical structure of a deterministic dynamical system from observed time series of the system response at multiple locations.

Under a given input, a trajectory will typically evolve towards a subset of the state space, known as an attractor, which has invariant properties such as dimension and stability. However, in real-world cases, one rarely has the ability to measure all the variables needed to describe the dynamics, and so recourse is made to the so-called embedology theorems (Takens, 1981).